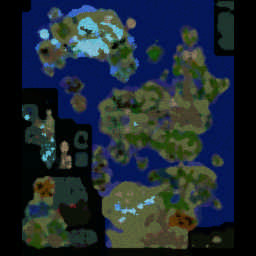 Strategy Map based on the Warcraft III TFT to WoW timelime.

This map does not support HD mode graphics.

This is an official map. The map is updated and suppported by: Hahay. Join us on discord to get in touch with the map developers.

Map versions
In total 78 map versions for Lordaeron: The Aftermath

LORDAERON: TA v1.59d
Strategy Map based on the Warcraft III TFT to WoW timelime.
(5.00)
Thank you for voting!

Changelog for "Lordaeron: The Aftermath"

-moved Event Alliances choice at the top of mode choice

-Mur’gul Slave can now be unsummoned

-Silvermoon City is untargetable by ships(finally!)

- Forgotten Knights have new W spell - Permafrost - Frezees the ground beneath, dealing damage to nearby ground enemies and slowing their movement and attack speed. If a target is frosted, its stunned instead

- Ymirion base armor increased by 3

- Infernal Machines(Both forms) do not benefit from armor upgrades

- Mistress of Torment - Base damage increased by 30

- Rends Aura is air only again

- Veil of shadows hero duration decreased from 30 to 4 seconds

- increased root/uproot time of Naxxramas from 2.5→7

-shallow water should now be buildable

-made adjustments to how pathing is determined internally. Pathing should now better reflect more detailed terrain/environment. Slightly faster load times and improved fps are also to be expected as a result.

-Draenor rifts are now capturable by everyone

-Now if Blood Elves decide to turn Illidari, if they haven’t restored Silvermoon prior to that, they will lose control of all units in Azeroth(Dalaran Dungeons excluded)

-They can regain control of lost units by restoring Silvermoon

- Unholy Gateway is no longer classified as a building

-Fallen Hero is no longer available in barracks

-(New) E Howling Blast - deals 55 damage to nearby enemy ground units. If a target is slowed by frost-related ability, it will be encased in Ice Tomb, preventing movement and attacking and taking extra 55 damage.

Carnage - increases damage done to units with unarmored armor by 35%

Q Taunt - repeatedly taunts nearby enemies every 2.5 seconds for 10 seconds

W Bane - Upon activating engulfs Ymirion in shadow flames, that strike at nearby enemies whenever he takes hostile damage. Drains mana until deactivated

- E Flamebinder(Limited to 12) - vrykul caster unit, has Ascendance and Return To Servitude, also:

F - Contempt for the weak

Ascendance: units with this passive will ascend into Ymirjar rank upon killing enemy player, non-summoned unit:

F Contempt for the weak

- F Contempt for the weak

- Q Sumon Shade of Utgarde - summons a spirit to fight the enemy. The spirit splits after performing certain amount of attacks

- F Contempt for the weak

- Lich King Bonus: Unlocks Contempt for the weak and Return to Servitude for vrykul units. Grants control of Ingvar the Plunderer:

Every dreadlord hero have new model

Demonic ascendance can be upgraded by ‘’Demonic Presence’’ which can be         researched in: Black Temple, Alterac, Stratholme, Tol Barad

Legion now has their own racial buildings set, buildable by gan’arg engineers:

Beam of neutralization mana cost reduced from 80 to 70

Fel parasite mana cost reduced from 50 to 45, damage per second buffed from 5 to 7

Legion now can conquer: Stratholme, Alterac, and Tol Barad to get there bases, bonus gold and units.

You get Doomwalker, works similar to Sindragosa, but for Outland

Doomwalker can be repaired once, after his second death he cause explosion

Infernal machine upgrade (limited to 8) after outland domination can be upgraded to gain bonus AS, MS, and DMG

Blackrock Alterac Orcs - requires: Nathrezim mastery and Alterac (some units are similar to DH units, but they have better stats)

Banshee, Forsaken Archer and Apothecary base health increased by 200(As was originally inteded…)

Archnecromancer now has Dark Ritual, which allows him to sacrifice friendly unit to restore 33% of its hitpoints as health/mana

Liches now have Phylactery passive that allow them to be reborn after a duration, if the phylactery survives

-reworked Dreadlord morphs on Barean and Saidan. Their alternate forms are considered same unit, no more deselection, etc. As a side effect, they also share bonus attribute level

- if Light Blue has established Scarlet Monastery he will gain bonus hero - Risen Blood Mage Thalnos, otherwise he will gain an item to proc the event:

W - Bone Armour - Bonus armor to nearby units on activation

-Two headhunters in Zul'Aman have been moved 3 m toward Zul’jin :smug:

- implemented -limited command to ping limited units. Some techtrees might not respond to the command(particularly from recent content) yet

- Web now is a target ability (no autocast)

-After Conquering Gilneas, Forsaken can proc an event to establish base in Ambermill area (requires all hostile buildings in the area to be destroyed)

- ‘’Spoils of War’’ heroes are removed upon going Putress/Empo sylvanas

- Sylvanas now procs the path with ability that is cast at Frozen Throne rather than upgrade.

- Grants 8 Greater Valkyrs that sacrifice themselves whenever Sylvanas dies. Once no

- Fixed Alliance with smoulderthorn and BDF

All above spell nerfs are reverted upon going Ice Troll path.

- Changed hero stat scaling for most heroes, no heroes should have more secondary stat then their main stat

- Fixed some tooltips and icons

- Nerfed mana generators to only affect player's own units

- Now you can choose between 2 subpaths after 10 mins which gives you a hero, and improve army with few new skills

- Grants you a new unit, plague spreaders(limited to 4)

- Swapped elemental blades on KorKron guards with new one

- fixed no CD net on riders

- Fel stalkers and marauder can create fel rider. Fel riders can be dismounted

- Dark horde units are lighter in colour, so they are visible on dark terrain

- High warlock is summonable from any altar

- Changed some tooltips and event messages

- General optimization (thanks to Merytz)

- Duplicate units in super plague fixed (thanks to Hahay)

- Terrain changes in Gilneas and near Jinhta'alor.

- A lot of updated models.

- probably some bug fixes and small changes that I didn't noted.

- Decreased amount of gold and wood that Belf receives from restoring Silvermoon and going Illidari.

- Added Raise Dead spell for Death knights and decreased they cost by 20g.

- Draenor Rifts are now recapturable for everyone.

- Kultiras Path because why not.

- 2 Elites in Ironforge from the start.

- Maggtheridon now have reincarnation instead of being tied to Black Temple.

- Buffed Raiders stats and added ranged mode for them.

- Forsaken now can summon Lilian Voss as new hero after 20 mins in game.

- Dar'khan can no longer become hero

- New Loa mechanic not implemented yet.

- Units from Zul'Dareisland moved to Zul'aman.

- Can again train juggernauts in shipyard.

- Some bugfixes not listed below

- Warlocks fel bolt damage nerfed to 70 from 90 and mana cost increased by 5.

- Baron Rivendare as demi hero will be replaced by Ramstein the Gorger (big Abomination).

-Cult now can choose between two subpaths after 10 mins in game:

-Only Patchwork or Maexxna can be trained at the same time.

-After berserker research, head hunters are properly replaced by troll berserkers. Even in buildings.

-Zaela Path no longer removes other paths,instead accepting brown into horde results in disabling other paths

-Worgen have items in shop again

-Lordaeron Refugees research is back

-Added some patches of trees in Black Temple/Terrokar Forest areas

-Pit Lords are back

-Heart of Naxxramas has Dark Sanctuary

-Maexnna is available at Heart of Naxxramas