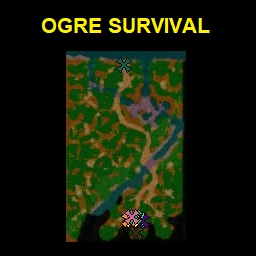 This is an official map. The map is updated and suppported by: SunLord. Join us on discord to get in touch with the map developers.

- Remove Exp Bonus in UI
- Change some name of Ogre

v1.09:
New Update :
- The level bar working now, A new feature EXP Bonus working on hero
+ Kill a unit wave all players gain 1 exp bonus
+ Kill a boss wave all player gain 20 exp bonus
+ Ogre gather Rock/ore gain 1 exp bonus per 5 attack
+ Ogre cast Herb to gain 1 exp bonus per 3 herb finish cast
+ Ogre cast Fishing gain 1 exp bonus per fishing finish
- Added Guide Beginner button on the top left screen, some guide for beginners with an image!
- I added a model per resources item
Changes/Balances:
- Added tooltip for the ability to learn item
- Balance resources take in the map
- Balance HP/Damage Creep Level 4
- Every unit summoned, and trained can't attack resources, can attack animal
- Light shield deal 6 damage / second ( interval 0.3125 deal 2 damage)
- Spirit Pig decrease 50 HP
- Change move speed of enemy of wave
Issue/Bug:
- Issue: The timer of the waves passed twice but I still didn't see anyone attacking me or coming towards me, the enemy wave worked on the third try actually (maybe a weird bug).
=> Fix the error countdown start wave
- Issue: The stones must be attacked several times to shatter then you can pick them. There is no suggestion regarding it, since they are so small the player will think that it is the item itself and will try to pick it since right-clicking won't issue any attack command on it. The fishes still can't be picked, they instantly drop to the ground
=> It's problem, I will fix this with a solution move resources nearby behind facing the hero
- Some skill of the boss wave is still active when the boss dies => Fixed
- Summon mur'gul with summoning pig will working same time
- Issue: if you select an occupied slot to learn a new ability, the old ability gets removed! I think this shouldn't happen and it is clearly a bug that must be fixed!
=> By supporting the hotkey order position, when adding a new ability, it will create an item learn in the old order spell and I was added cooldown for learn item, some players can use this trick