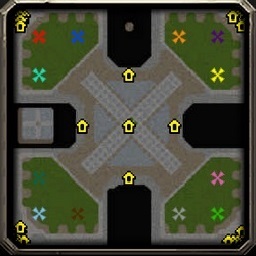 This is an official map. The map is updated and suppported by: miRaculix . Join us on discord to get in touch with the map developers. 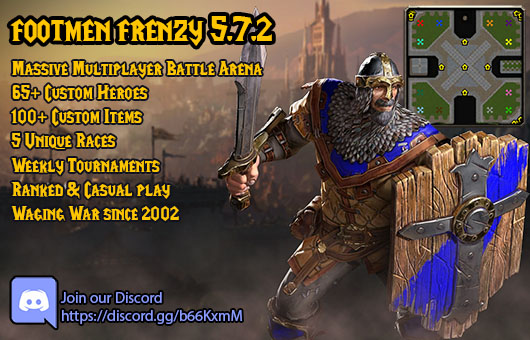 Four teams of three players battle against each other for victory. Each team selects a hero while footmen auto-spawn at base. After a short time, teams meet in the middle and the fight begins. As the game progresses, teams spend their gold on tech upgrades, items, and creeps to execute a game-winning strategy. Teamwork is key to victory!

Our dev team strives to preserve the spirt of the Footmen Frenzy while regularly adding new features and heroes to ensure the game is in the most balanced state. Since Reforged’s release, we have updated our map 20+ times, with some updates featuring over 200 substantive improvements. Most of these improvements have been geared towards retaining new players while also making the game dynamic at the highest level of play.

We have an incredibly active and growing community. We have a large group of veteran players who understand the game mechanics arguably similar to some of the most seasoned pros in melee WC3. These players have been committed to Footmen Frenzy for over 15 years. They come from all over the world and represent unique playing styles. We have prioritized streaming our high-level “inhouse” games as they often involve the excitement, teamwork, and strategy you would see in high-level melee WC3.


Our community has grown significantly since Reforged’s release. Our Discord channel boasts over 500 players, and we hold weekly tournaments on Thursdays and Fridays in the Americas server—on the European server, inhouse games typically run all day every day. As for standard public games, our latest version of Footmen Frenzy Reforged is hosted continuously throughout day. We have retained hundreds of new players who are committed to learning the meta and playing competitively. Accessibility is our number one priority.

Zoom for observers with no fog of war

Leaver base mark movable (by AM mass teleport) fixed

Architect: Towers are no longer dispel-able

Blade Master: is now prohibited from using Tusk of Pitlord

Cat: Base stats of the hero will now have a ‘int’ focus

Cryptlord: Level 6 beetles have been reduced to 8 (from 20)

Footy Girl: increased the spell reduction of spell shield by +300 every level

Shadow Hunter: Bounty for serpant wards have been decreased to 20 at all levels

Pirate: Blink range has been capped at all levels (no more jumping in and out of bases)

Quill Beasts (Sexi and BM): non dispel-able at all levels

Kodos: base hp increase of +50

Taurens: total base hp increase of +100

Knights: increase base armor to 12

Mortars: reduced base hp to 700

Dark Mortars: reduced base hp to 1400

Dark Mortars: reduce base armor to 15

Jamie: unavailable until after mass

Sorceress: can now be xmuted

Spiders: price to 300, hp increased to 800 and attack type to chaos

Shockwave of the Gods (SOG): No longer affects buildings

Obsidian Colossal now has re incarnation to fend from Bill ultimates