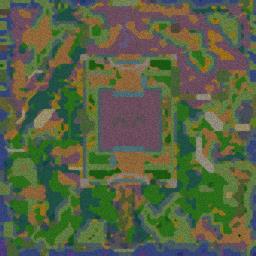 Recruit creatures. And fight for the castle.

You will play a powerful hero which can break lilac crystals made by crystalwind forest by spending energy.
Gathering mysterious creatures and items that lock by lilac crystals. Use that power to take down your opponent's castle.

Pestilential Barrage (W) : Send a mass of hyperbaric gas moving towards in target direction while the hero also recoils in the opposite direction, Dealing Magic-damage and knocking back any enemies they collide by gas clumps, if those enemies are able to move. All friendly creatures on path gains Stealth for a while. The gas clumps decrease 20% of its current velocity for each enemies it hits.

Cruel Revelation (E) : Sacrifice a friendly non-hero creature or building. If you do, the hero deals Spell-damage to all enemies nearby the sacrificed object. Object damaged this way loses mana base on sacrificed object's mana."

Put X Contraband in your hero's inventory, where X is half the number of sacrificed object's attributes requirement.

Active ~ Choose a friendly creature or building from anywhere. Then the hero channels for 5 seconds, it gains Stealth and gives chosen object armor within duration. When channeling is done, exchange the position of hero and the chosen object, if they are able to move. Objects who move this way fires a shockwave that pass through the movement path, dealing Spell-damage base on total Basic-Attack power of hero and chosen object.

Equilibrium (T) : Deploy a  building named "The Order of Equilibrium" to target point.

Create a item named Handcuffs put it into hero's inventory. You can use Handcuffs to imprison target recruitable object. And you may recruit objects imprisoned this way any time for the rest of the game."

with a same name of the sacrificed creature.

Their life and life volume is half the sacrificed creature's.

If creature summoned this way would die, deal X Erode

Spell-damage to their controller's castle.

Where X is equal to creature level multiplied by forty.

If you activate this ability at night, the blink range increase

Remove all charges from this item.

Deals 38 Erode Spell-damage per second to any target for

Now each player start with three option of heroes, choose one of three heroes to start the game.

Then each player now have two option of tutors, choose one of two tutors to open the path.