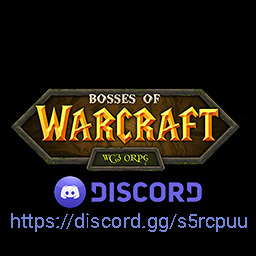 (4.72)
Thank you for voting!
Download (24.87MB)
Whether or not you have already played our Warcraft III map, Bosses of Warcraft is an expansive project created to combine the elements of Professions, Dungeons and raid-style Bosses with the highly adaptable Warcraft III engine to create a unique user experience.

Fixed a bug where you could mount up from Mailbox.

Attempted to fix the Desync bug where a player loads in the same frame as a player creates a new character.

Attempted to fix the load bug where lvl 10 characters gets spawned if the ping between you and the host is 150+.

Added a DISBTN discord logo, preventing it from going green in the Discord Shop when there are no players nearby.

You can now teleport to The Void from Gern'Or

Applied a potential fix to Howlwind effect being applied to allies

You now deal 0 damage if you attack an enemy from Zone 2 while being in Zone 1, and the other way around.

Fixed an issue where if you killed an enemy at the same frame as it is suppose to reset on range, then it gets stuck in a reset loop

Changed the appearance of Fishing lvl 2 spots to make them stand out more.

Fixed visibility issues at the shoreline of The Splintered Isles.

Removed the debug msg "Add Index: 0" when attacked by a golem

Fixed a bug where summoned units in the open world could still drop items.

Equipping gear while already having gear equipped now returns the swapped item to the same spot as the item it was swapped with. This does not yet work with Dual Wielding but will soon.

Fixed a leak with Empower.

Mailbox no longer has Footman description

Emotes has gotten a rework from @Explobomb! You'll love it.

Fixed the effect of Mask of the Vengeful Phantasm and made it's effect more clear in the description.

Fixed issue where you could move around some shop units.

Changed Summarized Group representation to be easier to see. Added "out of X total players" field.

Fixed some pathing blockers, preventing you to go through walls in a very specific place.

You can now ping anywhere on the map by pressing "G"

Increased the delay between the players loading from 1 second to 1.25 seconds to combat against lag-oriented queue load issues.

You can no longer swap out potions while inside a dungeon.

Increased the mana gained from Watermend Ring and Gift of Tranquility by 0.1x%Value